In this post, we will continue with our study of supervised learning by exploring our first classification algorithm. A vast majority of problems tackled in the real world involve classification, from image labelling, to spam detection, to predicting whether it will be sunny tomorrow, so we are at an exciting milestone in our study of artificial intelligence!

To motivate logistic regression, let us begin with a modified version of our running car example from the last post on linear regression.

Rather than build a system to predict the price of a car, we will build a system that is provided a set of features of a car and will determine whether the car is expensive or cheap. In particular, we will extract a few different features from the cars in our dataset such as:

Let’s call these features X1​, X2​, and X3​. We will consolidate these features into a single vector variable X=(X1,X2,X3). These features will be fed into a mathematical function F(X), to get a probability of whether or not the car is expensive.

In other words, we will compute F(X) (where the function F is unspecified for now), and this will give us a probability between 0 and 1. We will then say that if our probability is greater than or equal to 0.5, we will label our prediction, expensive, otherwise it will be cheap. This can be expressed mathematically as follows:

Note, we could have reversed the labels and said a probability greater than 0.5 is cheap and it would not have made a difference. The only important thing is to be consistent once you’ve selected a labelling scheme!

So what exactly is going on in that F(X) function? The logistic regression model describes the relationship between our input car features and the output probabilities through a very particular mathematical formulation. Given our input features X1​, X2​, and X3​ the formulation is as follows:

where here the weights of our model that we have to learn are A1​, A2​, and A3. Ok, this gives us the mathematical form, but let’s try to gain some visual intuition for the formulation. What does this function actually look like?

It turns out that this function of the inputs, which is called a sigmoid, has a very interesting form: 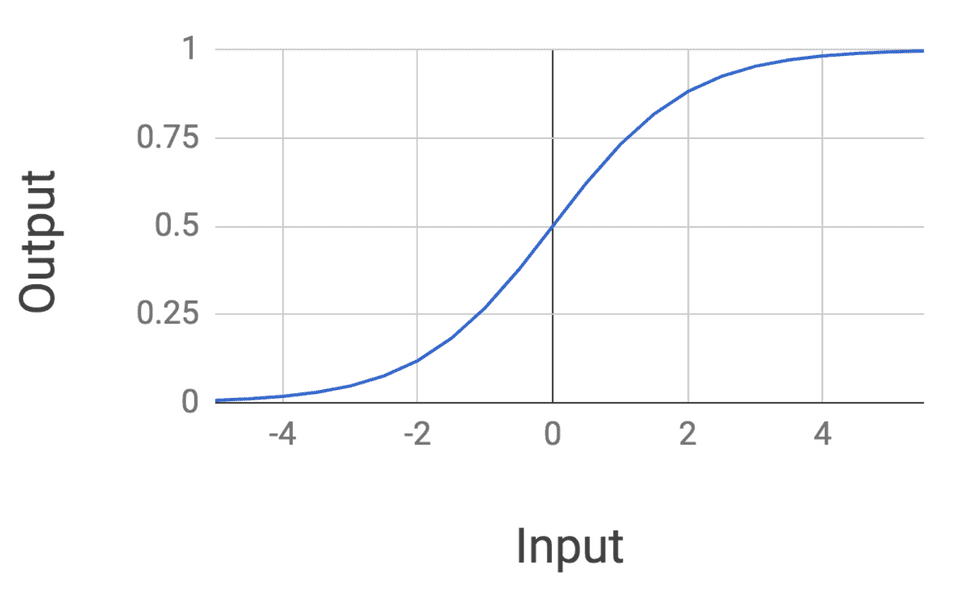 Notice how the mathematical form of the logistic regression function has a sort of elongated S shape. The probability returned is exactly 0.5 when the input is 0, and the probability plateaus at 1 as our input gets larger. It also plateaus at 0 as the inputs get much smaller.

Logistic regression is also interesting because we are taking our feature of inputs, transforming them via a linear combination of the weights (namely A1⋅X1+A2⋅X2+A3⋅X3), and then running them through a nonlinear function.

How do we train the weights of a logistic regression model? Let’s assume that we have a dataset of n cars with their associated true labels: [(X1​,Y1​),(X2​,Y2​),...,(Xn​,Yn​)]. We won’t dive into the mathematical details, but it turns out we can write an expression for the total probability of our dataset which looks as follows:

For our purposes, understand that our aim will be to maximize this probability. We can do by taking the derivative with respect to our weights and setting the derivative to 0. We can then run gradient descent using our computed gradient to get our optimal weights. This is analogous to the procedure used for numerically optimizing a linear regression model in the linear regression post.

For this post we have restricted ourselves to binary outputs because it is a natural place to start. That being said, multinomial logistic regression is especially important for more sophisticated models used in deep learning.

It has a fairly straightforward description, can be trained fairly quickly through techniques such as gradient descent because of its nice derivative, and often works well in practice. It is used frequently in biostatistical applications where there are many binary classification problems.