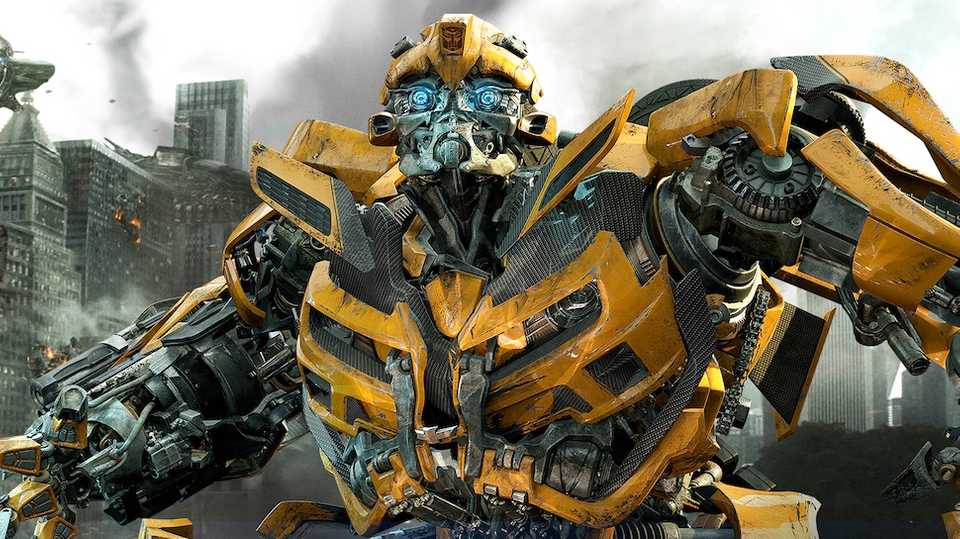 “No recurrent units or convolution?! What are these models even made of?!”, you may be exclaiming to unsuspecting strangers on the streets.

Not much it turns out, other than a bunch of attention and feedforward operations.

While the individual components that make up the Transformer model are not particularly novel, this is still a pretty dense paper with a lot of moving parts. So our aim in this post will be to distill the model to its key contributions, without getting too stuck in the details.

But first, the TLDR for the paper:

If that sounds exciting, read onward!

While the Transformer does not use traditional recurrent units or convolutions, it still takes inspiration from sequence-to-sequence architectures where we encode some input and iteratively decode a desired output.

How does this play out in practice? Let’s focus on the encoder first. There are quite a few elements to the process, so don’t get too lost in the details. All we are doing is encoding some inputs 🙂.

Assume we start with a certain phrase that we would like to translate from Spanish to English. The Transformer begins by embedding the tokens of the Spanish phrase into a conventional embedding matrix:

Because the model makes no use of recurrence, we need some way to represent position-based information in the model. Hence we add a positional encoding to this embedding matrix, whose exact form we will describe in the next section:

Our modified input is fed into the first layer of the Transformer encoder. Within each encoder layer, we perform a series of operations on the inputs.

First off, we feed the input through a multi-head attention operation: 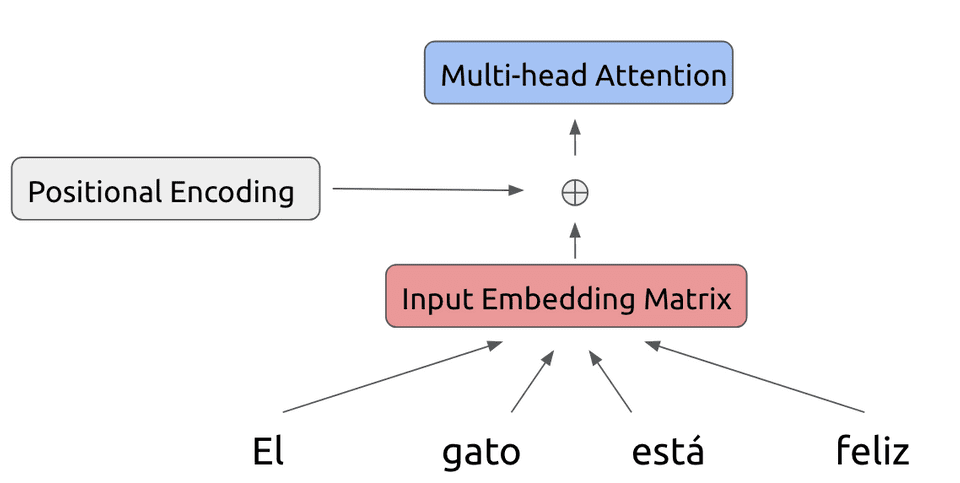 To this attention output, we also add a residual connection as well as perform a layer normalization step: 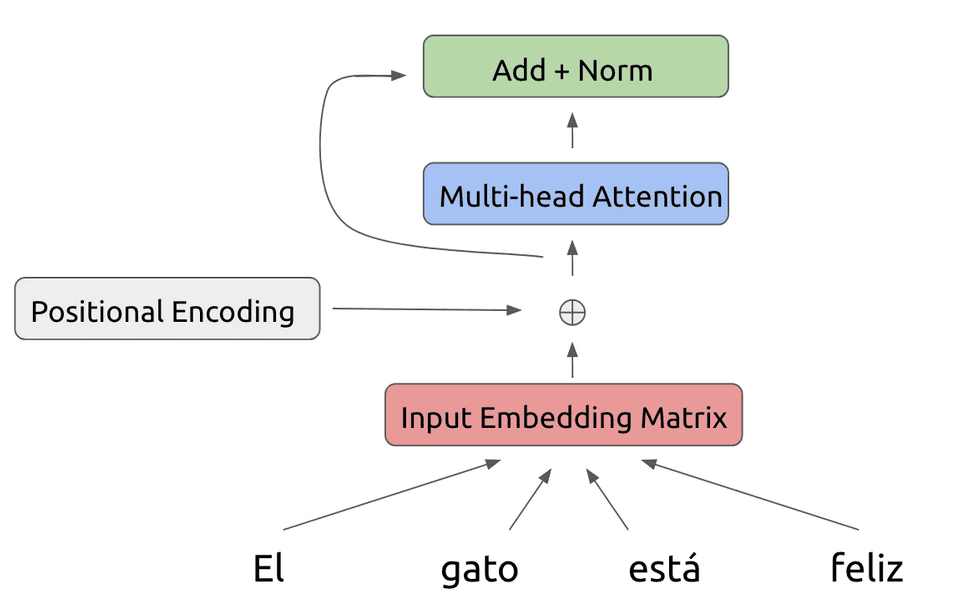 Now, we feed this result into a feedforward layer also using a residual connection and layer normalization: 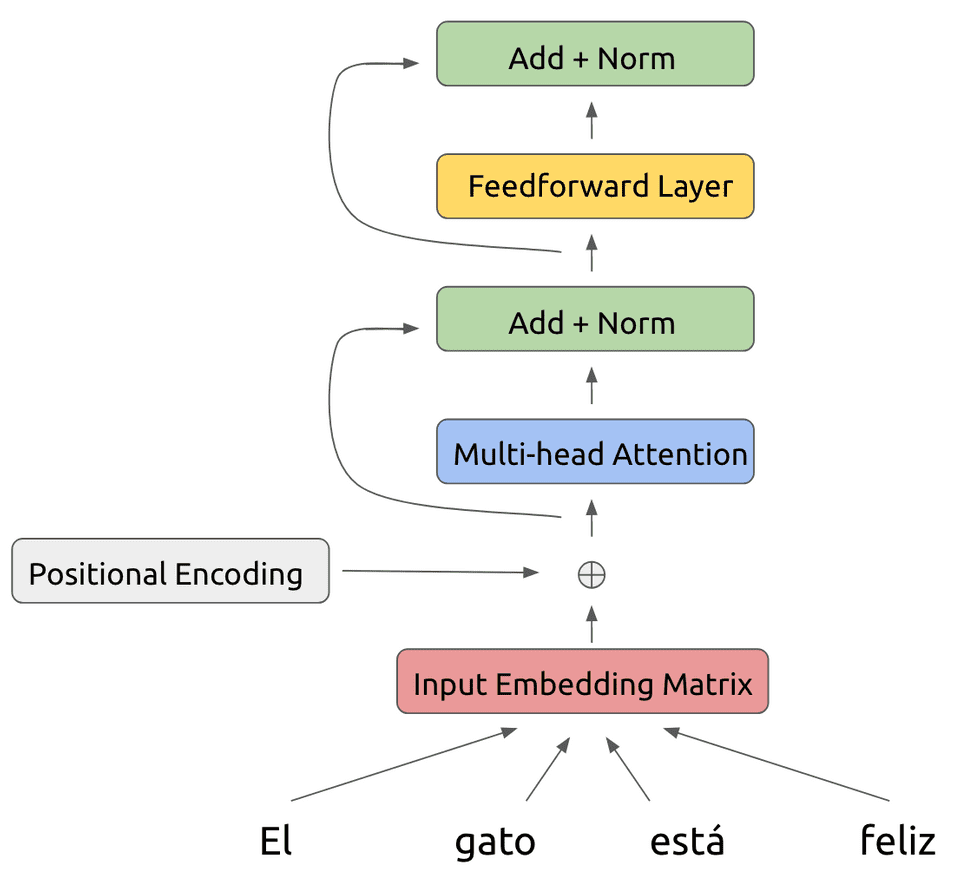 This is the result of our first layer encoder operation! This is fed as the input to another identical layer. In total, the Transformer encoder uses six stacked layers: 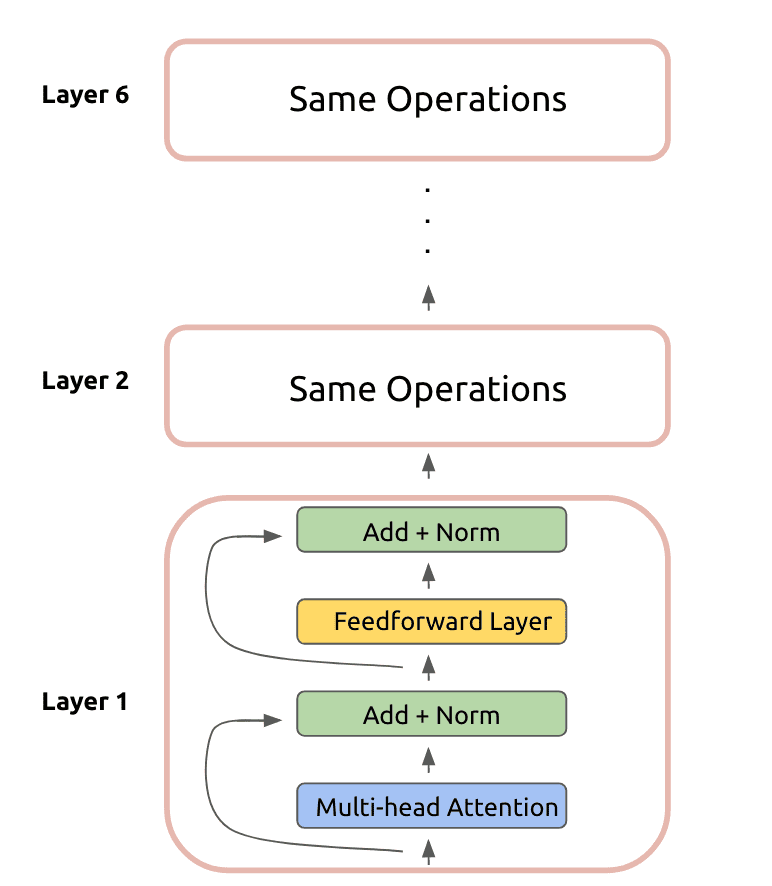 Now we can move on to the Transformer decoder. In practice, the decoder also uses six stacked layers that perform a set of operations. These operations are largely identical to the encoder layer, except for a few small differences:

In practice this look as follows: 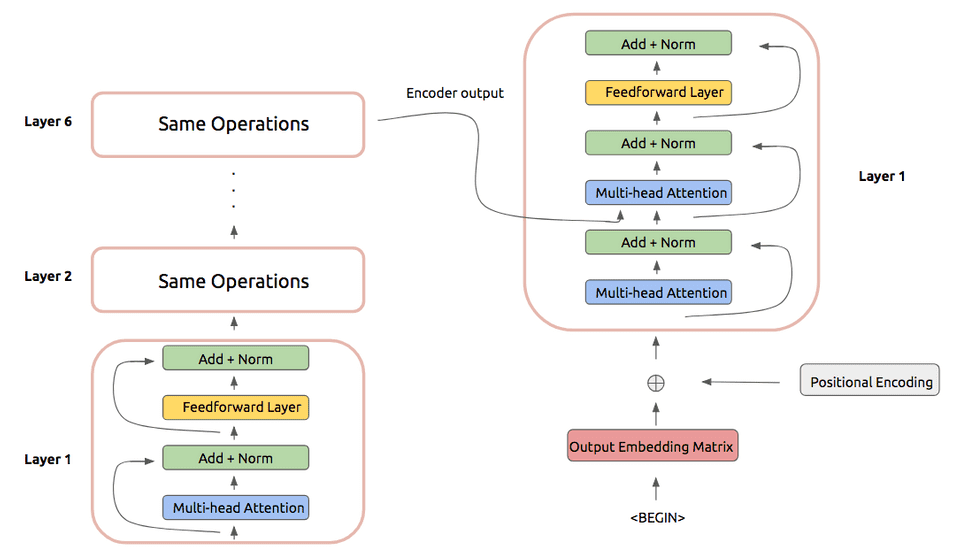 After performing these operations, we can predict the next token of our translated phrase: 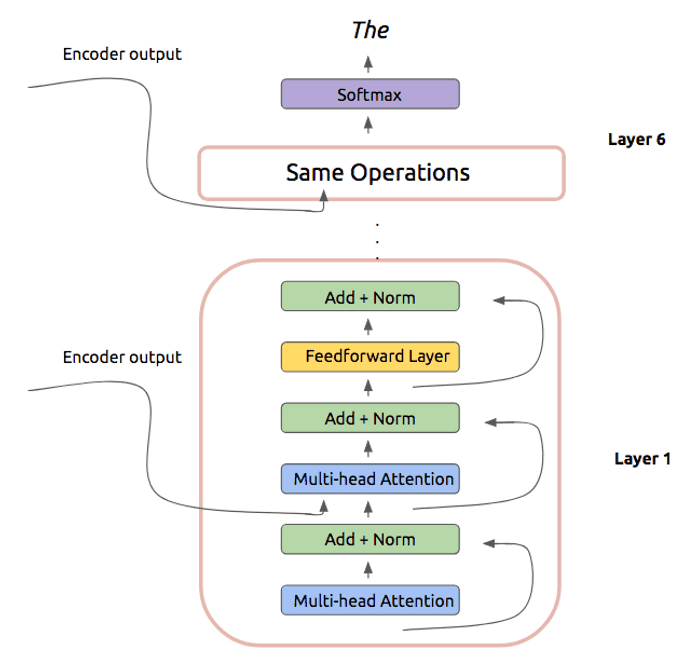 And that’s the Transformer!

How Transformers Are Built

While the Transformer architecture may seem conceptually simple, the devil is of course in the details. To that end, there are quite a few aspects that warrant some further description.

The positional encoding added to the encoder and decoder inputs is the first question mark in the model. What’s up with that?

Recall that the positional encoding is designed to help the model learn some notion of sequences and relative positioning of tokens. This is crucial for language-based tasks especially here because we are not making use of any traditional recurrent units.

In the Transformer architecture, the positional encoding is a vector described by the following equations:

Here the i denotes the vector index we are looking at, pos denotes the token, and dmodel​ denotes a fixed constant representing the dimension of the input embeddings. Ok let’s break it down further.

What this vector is basically saying is that for a given fixed vector index, as we vary the pos (corresponding to tokens at different positions), we form a sinusoid: 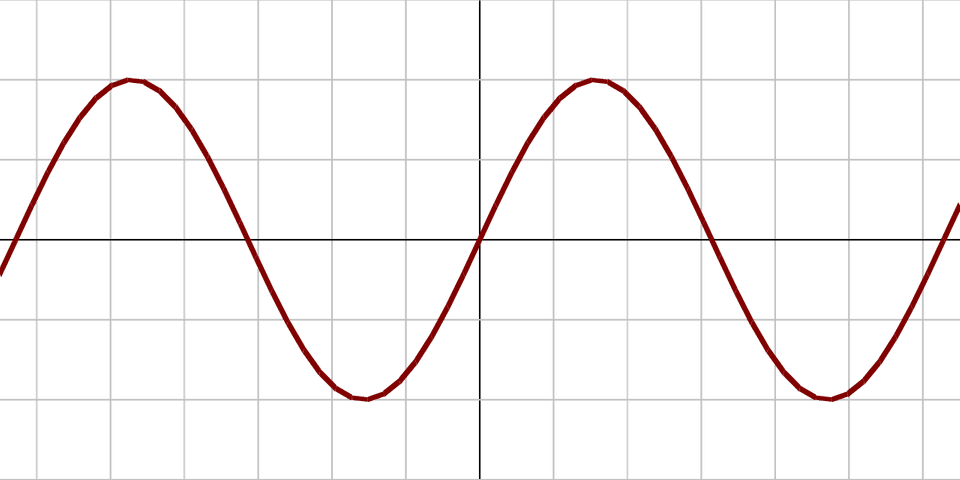 This particular form for the positional encoding was chosen because the value for the encoding at a given position PEpos+k​ can be represented as a linear function of values for the encoding at earlier positions PEpos​. This follows from trigonometric identities and is equivalent to saying that a given token can learn to attend to earlier tokens in a sequence. This is an essential property for the Transformer.

The multi-head attention operation is one of the main contributions of this model. So let’s dive into how it works.

More formally, an attention takes a query, computes some weights with respect to a set of keys, and uses those weights to form a weighted combination of a collection of values. In mathematical terms, the Transformer attention can be described as:

where Q, K, and V are the query, key, and value matrices respectively and dk​ is a fixed scaling constant.

In the case of the encoder self-attention, the keys, values, and queries are all the same value, namely the output from the previous layer of encoding.

In the case of the masked decoder self-attention, the same is true except that a mask is applied so that a position of decoding can only attend to previous positions.

where W∗∗​ are appropriately-dimensioned weight matrices. The beauty of the multi-head attention is that the operation is easily parallelizable, which leads to reduced runtime.

In spite of circumventing the traditional recurrent architectures, the Transformer is amazing because it is still able to outperform its recurrent counterparts. On the English-to-German and English-to-French WMT translation tasks, the Transformer achieves state-of-the-art BLEU scores (41.8 on EN-FR and 28.4 on EN-DE).

This whole notion of self-attention is an essential one in the Transformer architecture. It Why is self-attention a desirable thing to use as the backbone of a model?

Above, layer complexity denotes the number of computations performed per layer. In this case, self-attention is more efficient than recurrence as long as the sequence length n is less than the input embedding dimension d, which is typically true.

The self-attention operation also connects all positions through a constant time number of computations, compared to recurrence which requires linear-time computations.

The Transformer is a real rebel in the natural language deep learning scene because of how it eschews conventional network constructs while still outperforming existing systems. It has challenged a lot of folk wisdom about the necessity of recurrence in natural language models. Since being released, the Transformer has been extended and used in new architectures, most recently BERT.

Is attention really all you need? Future work will answer that question!