In this post, we will explore a family of classification algorithms that has a very different theoretical motivation from ones we’ve seen previously. We will be looking at support vector machines.

Back in the early 2000s before deep learning surged to the forefront of AI, support vector machines were the cool kid on the block. Even today, support vector machines are still one of the best go-to algorithms for a new classification task because of their powerful ability to represent very diverse types of statistical relationships in data as well as their ease of training.

Let’s begin by motivating support vector machines. Recall our ridiculously overused classification problem: identifying whether a car is cheap or expensive, based on a set of features of that car. 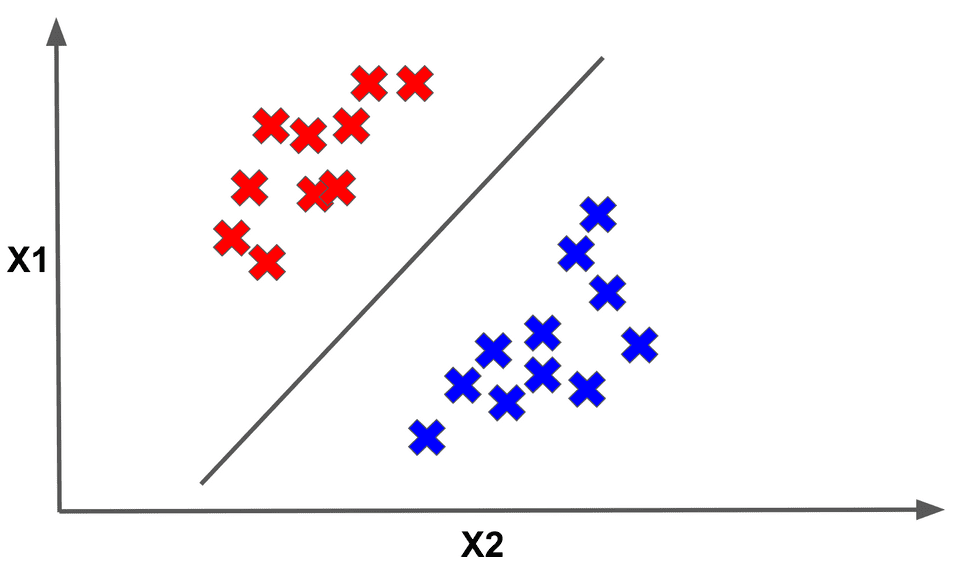 Here the datapoints above the line are classified as RED, while those below are classified as BLUE. The important thing to see is that this is only one possible linear separator of the data. However, we could envision another separator that could separate the dataset into two colored halves just as well: 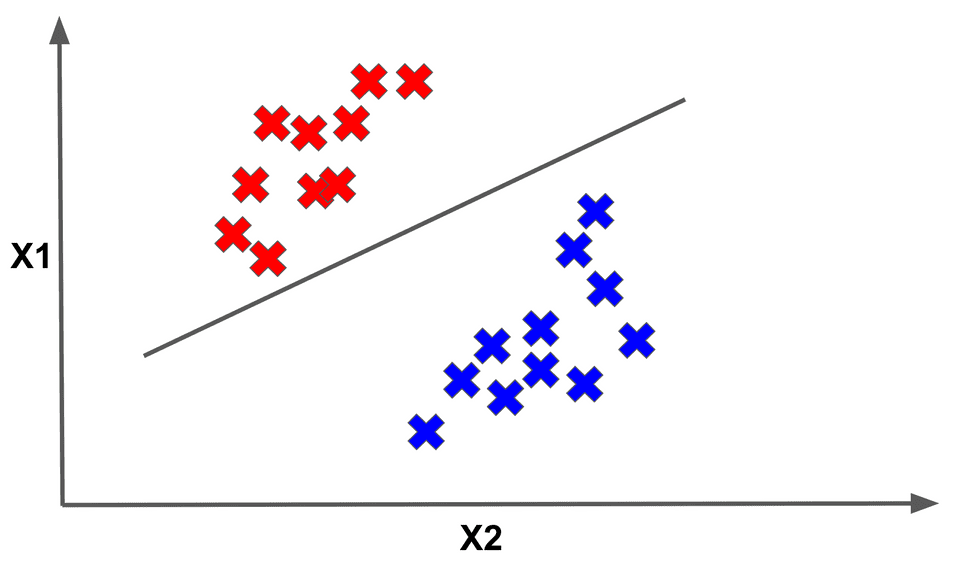 In fact, there are an infinite number of possible separators that would split the data perfectly! How do we choose among them?

Alternatively, the more negative the quantity is for a point the more confident we are that it should be BLUE. In fact, we can use this value to judge our confidence for every single point! 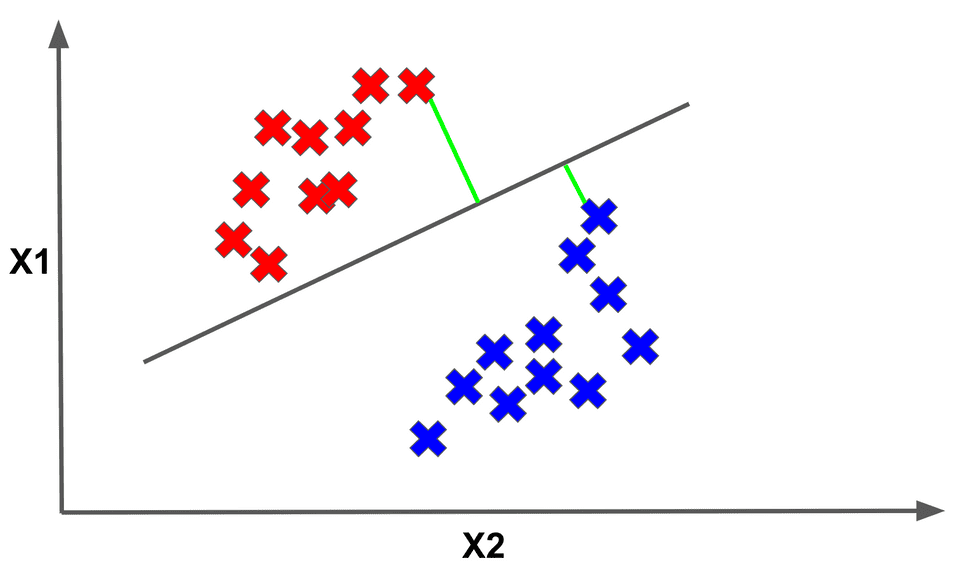 Now imagine if we took the minimum distance to the separator across all the points in the dataset. This minimum value is called the margin. Below we show the point that achieves the margin for the given separator: 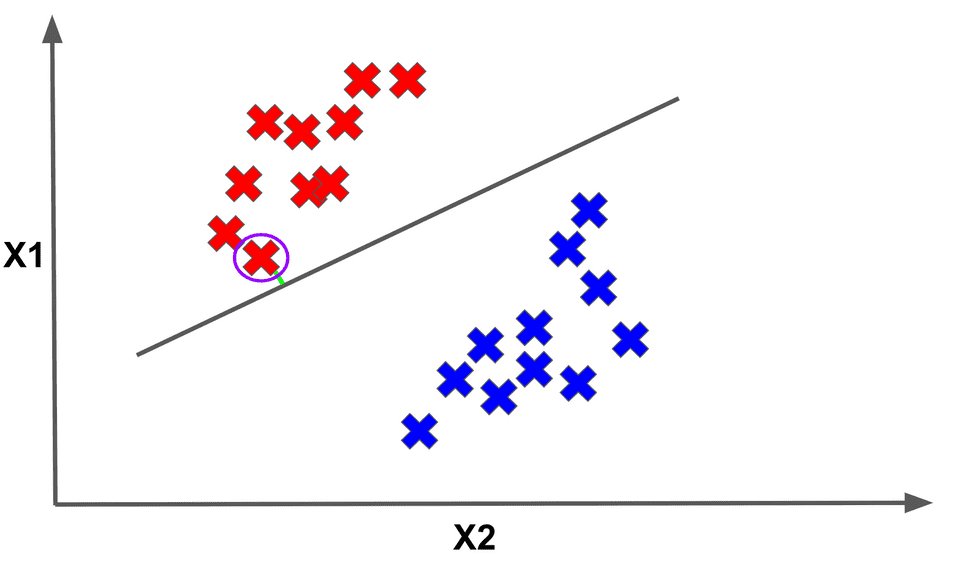 Optimal margins are at the core of support vector machine theory, and they inform how we will pick the “best” linear separator among the infinite choices. The way we will do this is by picking the linear separator that maximizes the margin.

Put another way, each separator defines a certain margin (i.e. an associated minimum perpendicular distance to the separator). Then, among the infinite possible separators, we will pick the separator that maximizes the margin.

Make sure you really understand that last statement! Support vector machines are often called max-margin classifiers for that exact reason. Given an optimal margin linear separator, the points with the smallest margins that are closest to the linear separator are called the support vectors.

So, how do we train a support vector machine? The full mathematical details to describe the cost function we want to optimize are a bit beyond the scope of this post, but we will give a brief description of the training cost function.

Given a collection of datapoints [(X1​,Y1​),(X2​,Y2​),...,(Xn​,Yn​)] (where X are the input features and Y are the correct output labels) and a vector of weights W for our input features, finding the optimal margin classifier amounts to solving

This cost function is basically a fancy way of saying that we want maximize the margin, while ensuring the margin of each datapoint is greater than or equal to 1.

It turns out finding the optimum for this cost function is a convex optimization problem, which means there exist standard algorithms for solving the problem. This is good news for us because it means optimally training a support vector machine is a tractable problem!

As a point of comparison, there exist some problems for which we cannot find the optimal value in a computationally reasonable time. It may even take exponential time to find the optimum!

Our transformation function did two things:

As a motivating example, consider the following data which is not linearly separable in 2-d space: 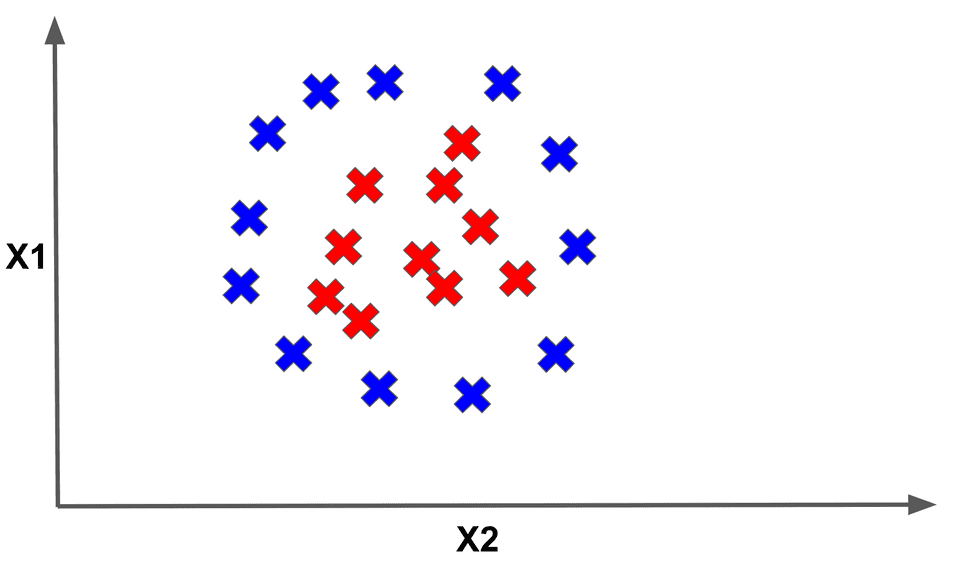 which becomes separable in 3-dimensional space through an appropriate feature transformation: 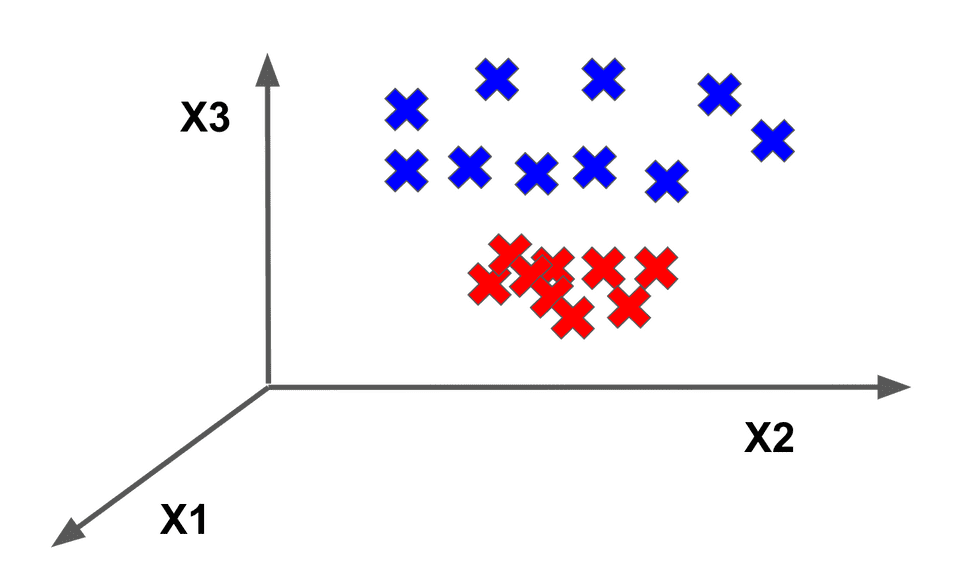 Without getting too much into the mathematical details, a kernel allows a support vector machine to learn using these transformed features in higher-dimensional space in a much more computationally efficient way. This is called the kernel trick.

Examples of kernels that are frequently used when learning a support vector machine model include the polynomial kernel and the radial basis function kernel.

A really crazy mathematical property of the radial basis function is that it can be interpreted as a mapping for an infinite-dimensional feature space! And yet we can still use it to do effective learning in our models. That’s insane

Thus far, we have assumed that the data we are working with is always linearly separable. And if it wasn’t to begin with, we assumed we could project it into a higher-dimensional feature space where it would be linearly separable and the kernel trick would do all the heavy lifting.

However, our data may not always be linearly separable. We may find ourselves in a situation as follows where it is impossible to linearly separate the data: 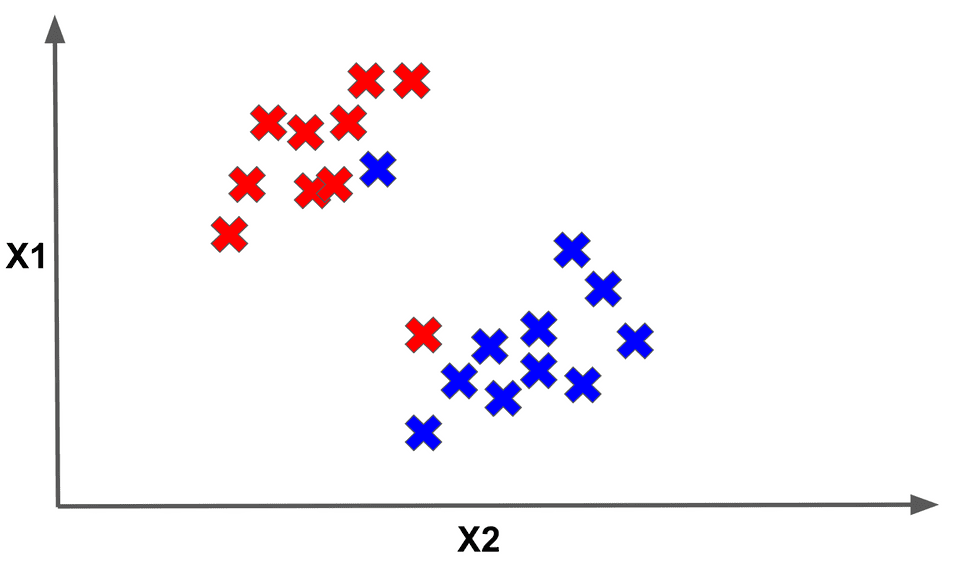 Moreover, recall that our original support vector machine cost function enforced the constraint that every point needs to have a margin greater than or equal to 1.

But perhaps this condition is too strict for all cases. For example, enforcing this condition for all points may make our model very susceptible to outliers as follows: 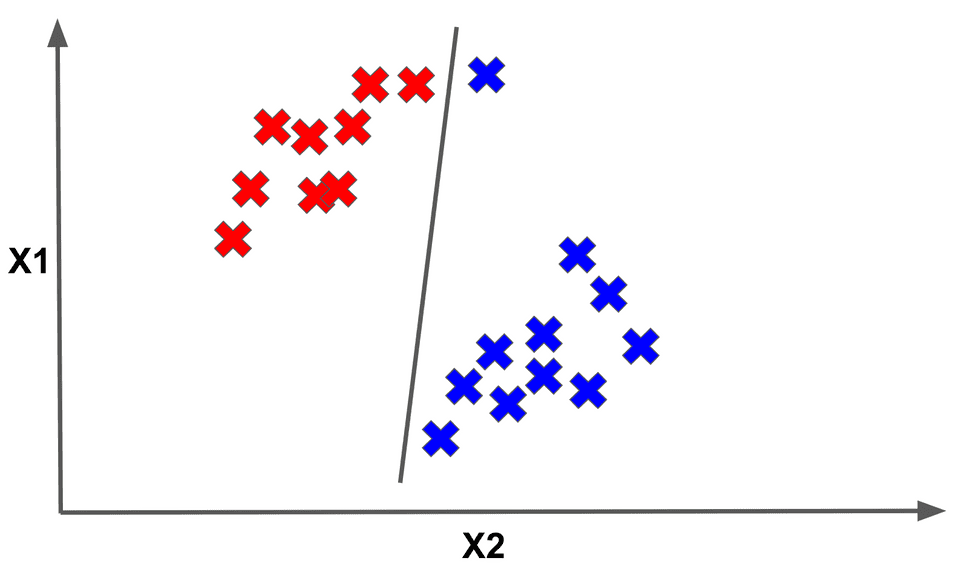 To combat this problem, we can introduce what are called slack penalties into our support vector machine objective that allow certain points to have margins potentially smaller than 1. With these penalties, our new cost looks as follows:

Here the si​ are our slack variables. Notice that we have changed the expression we are trying to minimize. The value K is what is called a hyperparameter.

In a nutshell, this means we can adjust K to determine how much we want our model to focus on minimizing the new term in our cost function or the old term. This is our first example of a very important concept in machine learning called regularization.

We will discuss regularization in a lot more detail in the next section. For now, just understand that this new addition makes the support vector machine more robust to nonlinearly-separable data.

As part of the machine learning toolkit, it is a great go-to model to try when starting on a new problem. However, one of its downsides is that using certain kernels, such as the radial basis function kernel, can sometimes make the model training slower, so be wary of that.