To motivate it, let’s imagine we have a featurized dataset consisting of the points (X1​,X2​,...,Xn​). So far in past posts, we have never spent too much time talking about the dimensionality of our datapoints, or in other words, the number of features per datapoint. We have largely imagined that our data consisted of a handful of manually-chosen features, maybe on the order of 5-20 or so.

But for many problems, our feature sets span upwards of thousands of features! As an example, consider a problem where we are analyzing some collection of text documents.

For such a problem, it is perfectly reasonable to featurize each document by the number of occurrences of each unique word. In other words, if the appears 3 times in the document and cat appears 5 times, we would have two separate features with values 3 and 5 respectively. Notice how in this case, our feature set could conceivably be equal in size to the number of words in the English dictionary, which is over 100,000 words!

Once we are dealing with high-dimensional data, we face a number of new challenges related to the computational cost of training a model or memory costs related to storing data on disk. Another question that naturally comes up is: do we have any redundancy in our features?

We derive features from data because we believe that those features contain information that will be useful for learning the outputs of our models. But if we have multiple features that encode similar information, then those extra features don’t help us learn a better model and may in fact just incur additional noise.

While these features aren’t exactly the same, they are still very related and it certainly seems like we wouldn’t have a less powerful model if we removed one of these features. 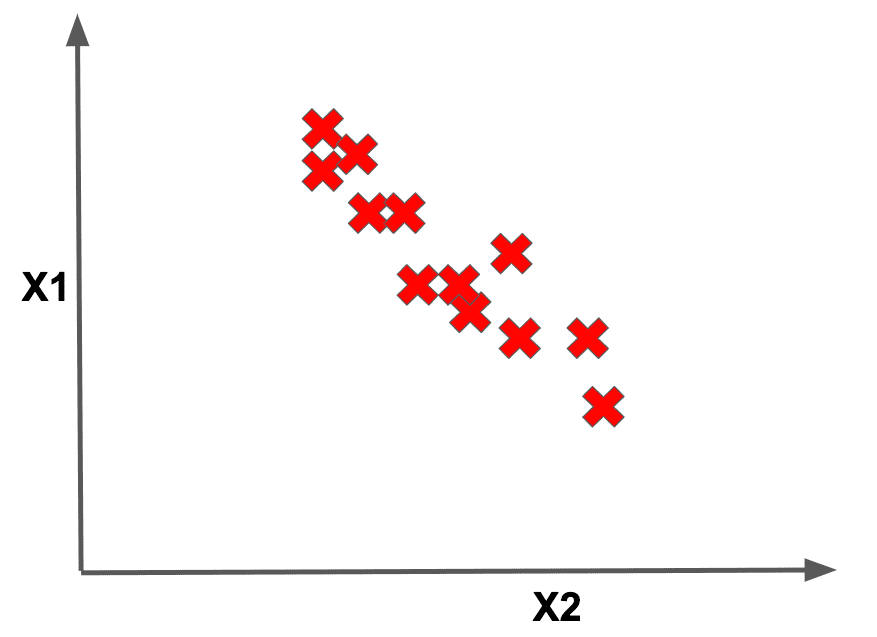 Notice how in this example, it seems that we really only need a single axis (rather than two) to represent our entire dataset, namely Z1​ below: 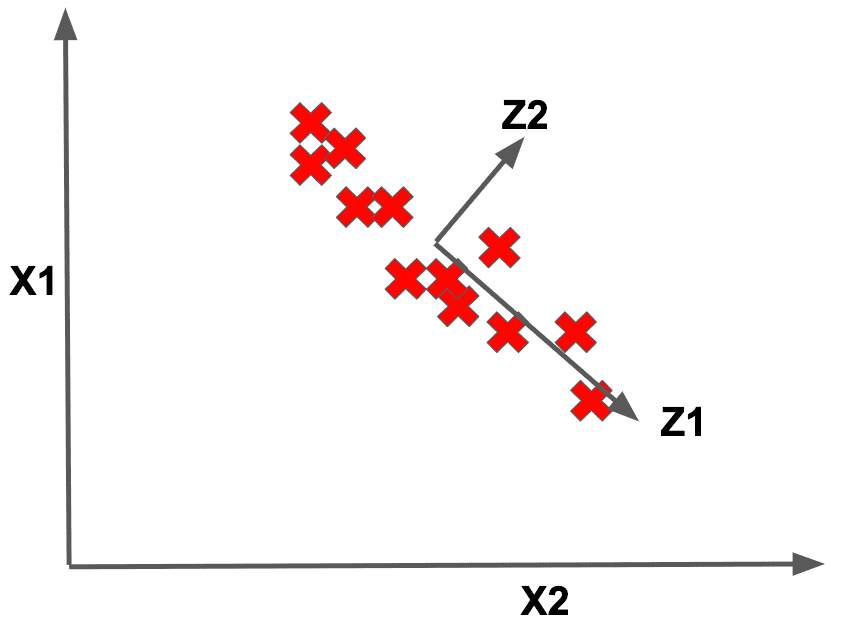 This means that we could project each datapoint on this new axis Z1​. Notice how except for a little bit of wiggle along the Z2​ direction that we don’t capture, our dataset could be represented in terms of this new single pseudofeature. Now the big qustion is: how do we pick this Z1​ axis to use for representing our dataset?

Well, in order to gain some intuition for the algorithm, let’s revisit our running example of the dataset above. While we deduced that Z1​ above was a good axis along which to project our data so as to reduce the dimensionality, imagine if we had picked Z2​ instead.

It certainly feels like this is an inferior, fairly non-representative, axis along which to reduce our dataset. So what makes our original Z1​ a better axis than this alternate Z2​?

In the second case, much of the data coalesces to a few very close points, which seems like this dimensionality reduction is making us lose some information.

Now that we know that PCA seeks to find the axis that maximizes the variance of our projected data, we’re going to drop a bit of math to formalize this notion.

For the 1-dimensional case, imagine that we have a dataset (X1​,X2​,...,Xn​). Maximizing the variance of the data is equivalent to finding the unit-vector, v, that maximizes:

Finding this v can be done pretty efficiently using some linear algebra properties that we won’t go into for now. Once we are done, this v is our first principal component!

In practice, when we are reducing our dataset we will choose some reasonable number of principal components to extract. In this way we could take each datapoint consisting of maybe 1000 features and represent it as a compressed vector of maybe 20 values (if we chose to extract 20 principal components). That is pretty awesome!

Because of this, PCA is often a go-to technique for data preprocessing before any model training is done. Alternatively PCA can be used to visualize very high-dimensional data by projecting it into maybe 2 or 3 dimensions, to gain some insights into what the data represents.

One last practical note regarding PCA is that it is common to normalize the dataset before running the algorithm, by subtracting out the dataset mean and also ensuring that the features are using the same units (you don’t want to have a feature that is a distance in meters and one in feet). After that normalization is done, we can run the PCA algorithm as described above.