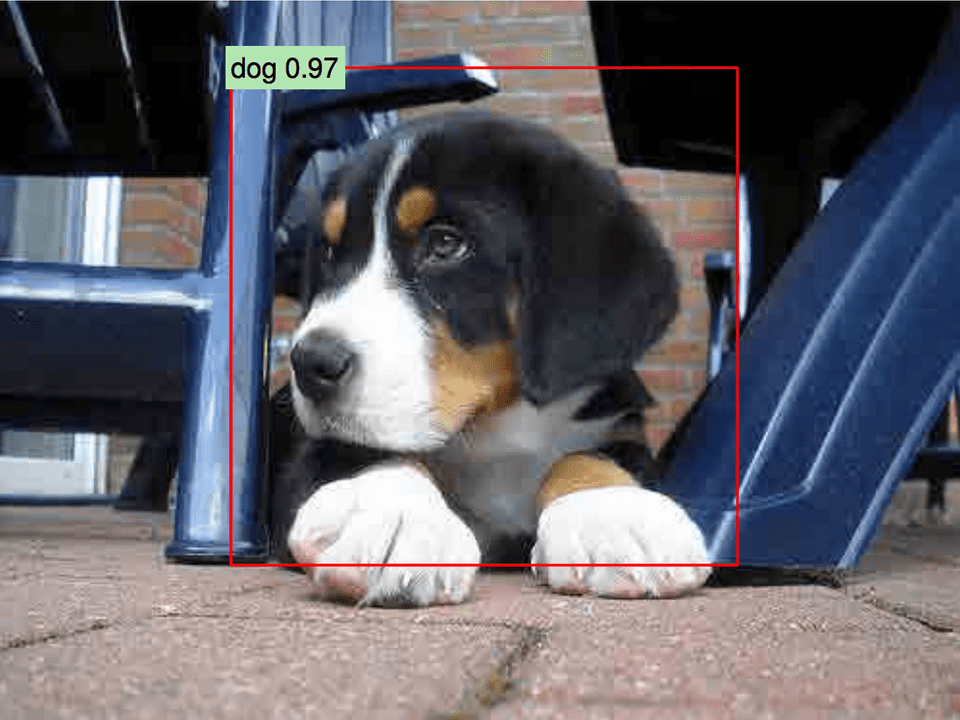 In this article, we will continue in the vein of classic object detection papers by discussing Fast R-CNN. Studying this line of region proposal with convolutional network work is rewarding because it allows us to see an iterative refinement on a collection of models, each seeking to address shortcomings in its predecessor. This, after all, is how science should work and so the R-CNN saga is an elegant one to thoroughly understand.

Since this work is a follow-up to the original R-CNN paper, I will assume familiarity with the details of that model. If you want a refresher on how the ancestor R-CNN worked, I highly recommend checking out this post.

The Fast R-CNN work set out to address a number of problems in the original R-CNN including:

Against that backdrop, Fast R-CNN proposed a hodge-podge of improvements and design modifications that improved the state-of-the-art in object detection as well as the speed of real systems (more than 200x speedup at inference time).

As always, let’s give our key takeaways from the paper:

For a more detailed description of how Fast R-CNN works, read on!

Let’s start with our obligatory cute cat and dog photo: 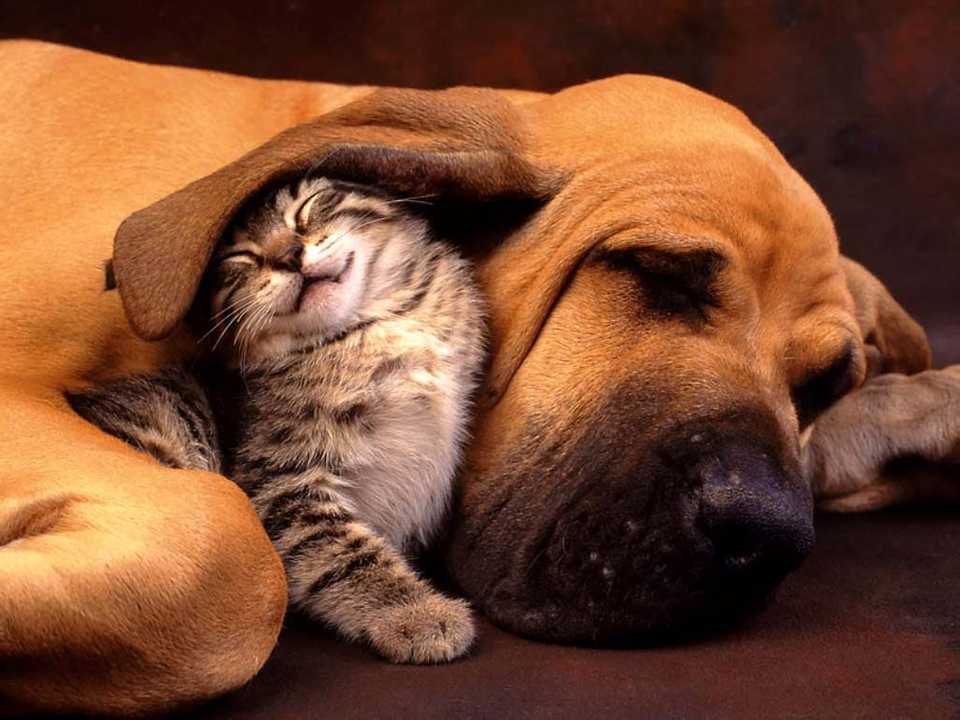 Pause. That’s adorable… Ok, let’s get back to what we’re here to do.

Like the original R-CNN, the fast version also begins by extracting a set of around 2000 region proposals from the input image: 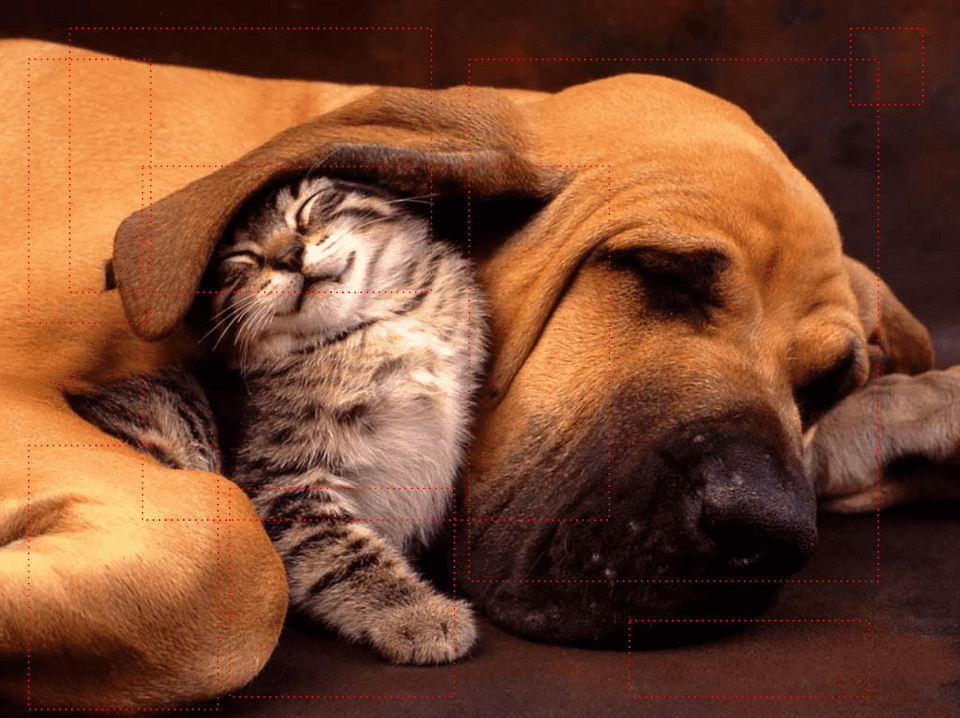 Now for each region proposal, we run it through a set of convolutional and max-pooling layers to extract a convolutional feature map: 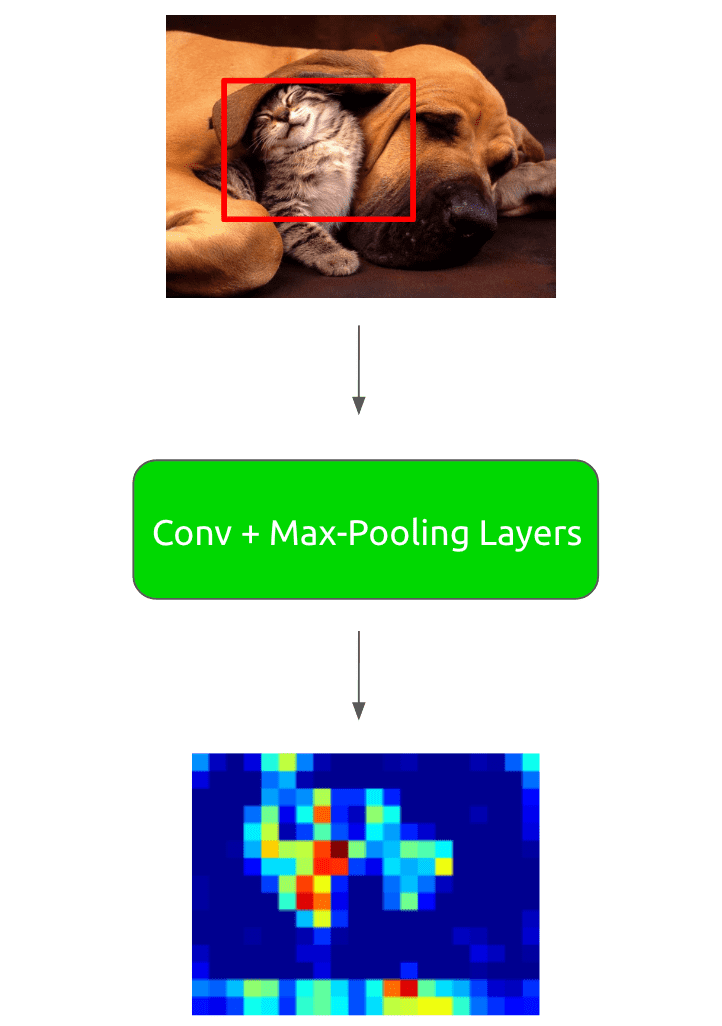 Now, given this feature map, we run each region-of-interest (RoI) through what is called an RoI pooling layer. This layer takes an h x w RoI region and runs max-pooling across a grid of sub-regions within the RoI. The output is a fixed H x W feature map, where H and W are hyperparameters that are constant across all RoIs, regardless of dimension. For example, H x W could be a 7 x 7 square.

After we have run our convolutional feature map through the RoI pooling layer, we are guaranteed a fixed-length output regardless of region proposal size. Therefore we can now execute a set of fully-connected layers to get an RoI feature vector. These transforms look as follows:

This looks as follows: 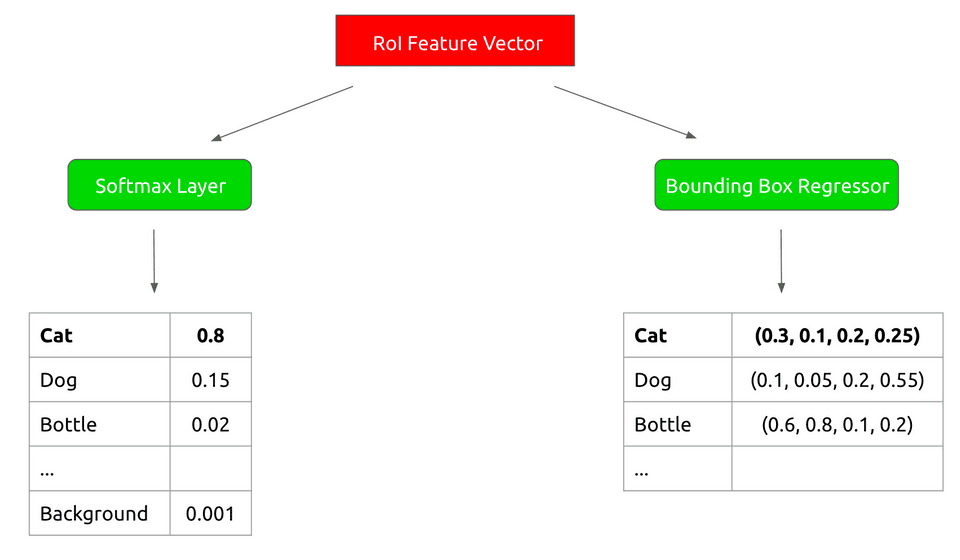 With these class probabilities and refined bounding box coordinates, we can output our final detection results for the original region proposal: 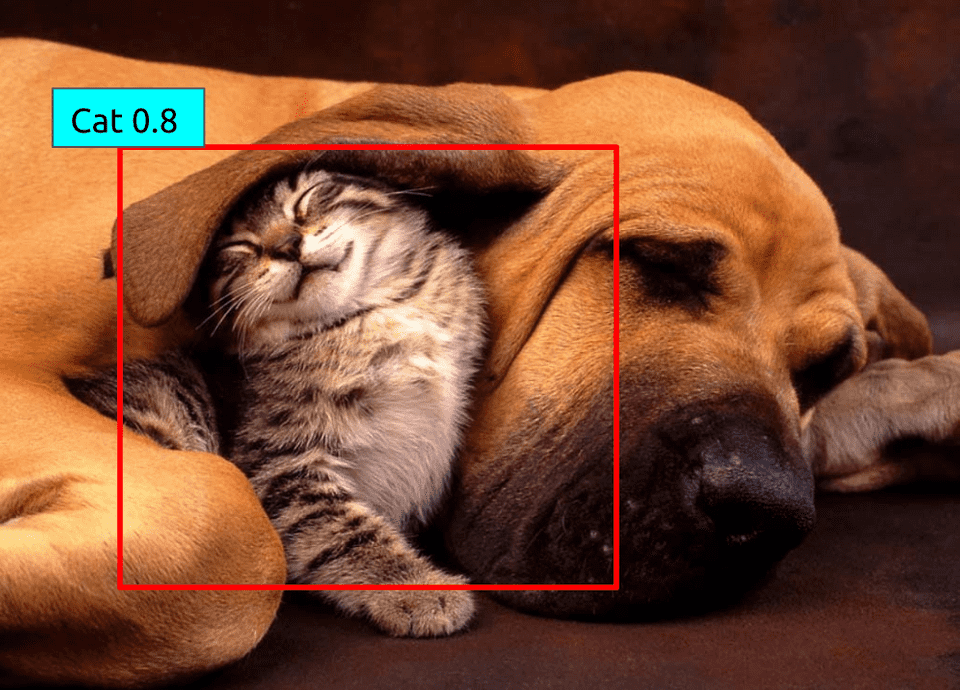 Neat! And that is the essence of how the fast R-CNN model works. We’ll dive into some details regarding how to build the model next.

How Fast R-CNN is Built

As in the case of R-CNN, it is crucial to use a pretrained network to initialize Fast R-CNN. Therefore, when training the system, we begin with a network pretrained on the ImageNet classification challenge. To adapt the model to the detection task, we perform a number of transformations:

The multi-task loss is one of the huge novelties of this work. It allows us to take the original R-CNN, which was a three-stage training pipeline (train convolutional network, train SVM classifiers, and train bounding box regressors) and collapse it into a single stage process. This is a very clever design choice for improving efficiency!

DISCLAIMER: The next section is a bit math-heavy! Get a coffee and skip to the end if you aren’t interested 🙂

What is the exact form of this multi-task loss? Assume that we are training for an RoI with a ground-truth class g and a bounding-box regression target r. In addition, let p be the output of our softmax sibling layer, which is a probability distribution over the K data classes plus the background class. We can also denote the output of the regressor sibling layer as a set of tk=(txk​,tyk​,twk​,thk​), a bounding-box tuple for each class k.

Our multi-task loss then looks as follows:

Here Lcls​(p,g)=−logpg​, where pg​ denotes the probability of class g. In addition, Lloc​(tg,r) denotes a smooth L1​ loss for the regression output defined as

In addition, λ denotes a hyperparameter (usually set to 1 in the paper) that determines the relative weight of the regression loss vs. the classification loss to the overall loss. The [g≥1] simply tells us that there is no Lloc​ defined for the background class.

Fast R-CNN also introduced a number of optimizations that sped up both training and testing time for the model.

First off, rather than use training minibatches consisting completely of RoIs from different images (which leads to slow convergence), Fast R-CNN samples a set of RoIs (around 64) from two images. This ends up being roughly 64x faster than sampling one RoI from 128 different images!

Another source of inefficiency for R-CNN-based architectures is that nearly half of the forward pass time for RoIs is spent computing fully-connected layers. As a result, in Fast R-CNN we replace the fully-connected layer matrix multiplication with a truncated singular value decomposition, resulting in additional speedups at the cost of small decreases in accuracy.

In the Fast R-CNN paper, there were also a number of experiments done that validated certain design decisions. For example, the authors tried a few training variants including using only a classification loss and keeping classification parameters frozen while using a pure regression loss. In all cases, the variants underperformed compared to a system trained on the joint classification/regression loss described in the previous section.

Fast R-CNN introduced some key design choices that led to state-of-the-art object detection results as well as huge speed-ups in training/testing time. I believe the use of a multi-task loss was especially important because it validated a concise single-stage architecture. This trend toward models with a minimal number of stages reflects the push in deep learning research toward end-to-end systems that can learn complex tasks purely from supervised data in one go.

In later posts, we will discuss the follow-up to this work which, for lack of a better name, is called Faster R-CNN. Stay tuned!