Task-oriented dialogue focuses on conversational agents that participate in user-initiated dialogues on domain-specific topics. Traditionally, the task-oriented dialogue community has often been hindered by a lack of sufficiently large and diverse datasets for training models across a variety of different domains.

In an effort to help alleviate this problem, we release a corpus of 3,031 multi-turn dialogues in three distinct domains appropriate for an in-car assistant: calendar scheduling, weather information retrieval, and point-of-interest navigation. Our dialogues are grounded through knowledge bases ensuring that they are versatile in their natural language without being completely free form. The dialogues include exchanges such as the following:

Our data was collected using a Wizard-of-Oz scheme inspired by that of Wen et. al. In our scheme, users had two potential modes they could play: Driver and Car Assistant. In the Driver mode, users were presented with a task that listed certain information they were trying to extract from the Car Assistant as well as the dialogue history exchanged between Driver and Car Assistant up to that point. An example task is presented in the Driver mode figure below. The Driver was then only responsible for contributing a single line of dialogue that appropriately continued the discourse given the prior dialogue history and the task definition.

Tasks were randomly specified by selecting values (5pm, Saturday, San Francisco, etc.) for three to five slots (time, date, location, etc.) that depended on the domain type. Values specified for the slots were chosen according to a uniform distribution from a per-domain candidate set. 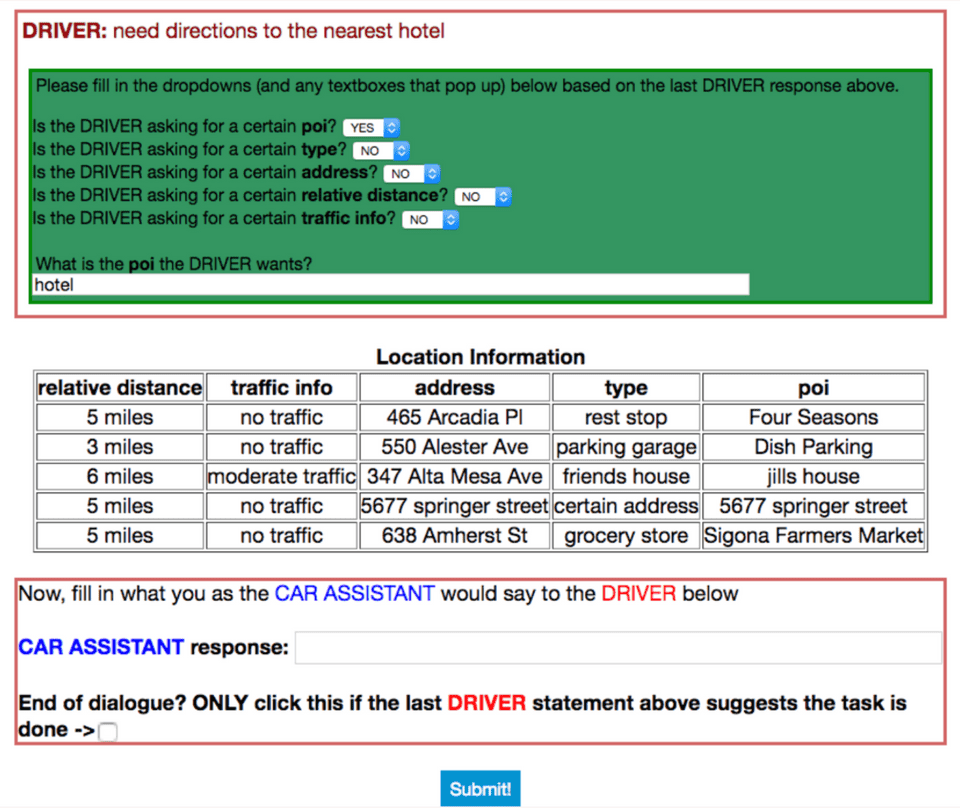 While specifying the attribute types and values in each task presented to the Driver allowed us to ground the subject of each dialogue with our desired entities, it would occasionally result in more mechanical discourse exchanges. To encourage more naturalistic, unbiased utterances, we had users record themselves saying commands in response to underspecified visual depictions of an action a car assistant could perform. These commands were transcribed and then inserted as the first exchange in a given dialogue on behalf of the Driver. Roughly 1,500 of the dialogues employed this transcribed audio command first-utterance technique.

241 unique workers from Amazon Mechanical Turk were anonymously recruited to use the interface we built over a period of about six days.

Below we include statistics for our dataset:

We also include some information regarding the type and number of slots per domain:

Our data is made publicly available for download at the following link: dataset
If you choose to use this dataset for your own work, please cite the following paper: